As Shichika knows nothing of the outside world, leaving him clueless to how embarrasing, annoying, or obvious his actions can be. In other words, he is often confused by simple customs and even has trouble telling people apart. He was raised as a weapon, and as such, is bad at expressing emotion, though he does regard Togame as his wielder. He states that he is in love with her, following her orders even when finding them to be a hassle. As he meets more people, he becomes more human and feels remorse for his previous actions.

When he was a child, he was innocent.

Shichika has a seven-pointed leaf motif throughout his design. His hair is shaped as a leaf and leaves appear on his thick, red ribbon belt, hands, ponytail, and hakama. As Shichika is not familiar with society, he walks around only half-clothed. He considers being fully clothed a hassle as it impairs his movement while fighting.

Formally, he wore a plain leaf-shaped vest and plain pants with a thick, black ribbon belt.

At the end of the series, he wears Togame's one-sleeved kimono (now dyed red) as a belt, as well as tying a lock of her hair to it. 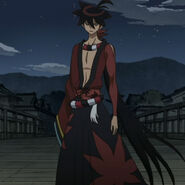 Shichika after Togame's death.
Add a photo to this gallery

Due to his father's exile, Shichika was raised on an isolated island in Tamba. He was second-born but chosen over his sister, Nanami Yasuri, to inherit the Kyotoryu fighting style. He feels protective of his sister and killed his father in order to protect her. Shichika does not seem aware of Nanami's true skill.

He is twenty-four when he is sought out and employed by Togame with a mission to find the twelve legendary Deviant Blades.

Shichika arrived in Kyoto (京) with Togame, where Shichika was soon viewed as a naked man by bystanders, to prevent suspicious purposes, Togame brought clothes for Shichika, but he strongly denied wearing anything for the upper body, saying that it is heavy and will get in the way. They ran into bandits along the way but Shichika quickly defeats them, however Togame told him to spare them. Meanwhile at Inaba (稲葉) desert, they found the corpse of Shirasagi Maniwa, one of the 12 heads of Maniwa corps lying across the desert, they head to Gekoku Castle to obtain their second deviant blade, Zantō Namakura, which is wielded by Ginkaku Uneri, an expert swordsman. When Togame negotiated with him, Uneri said it is rude to talk to a swordsman across the door and requested her to enter the room, which obviously a trap to lure into his attack range. Shichika quickly reacts and save Togame from Uneri Zerosen's, Ianuki, a supreme sword technique, then retreat to strategist. Shichika admits that his Zerosen is so fast that he cannot see the blade at all.

After the battle, Shichika admires Uneri's pride deeply, he thought his final line was really cool. Togame told him it wasn't a catchphrase, it was a dying message, and told him not to think too hard about it.

Togame and Shichika departs to Izumo (出雲), where they encounter Meisai Tsuruga, the Sanzu (三途) Shrine Head. She is willing to give over Sentō Tsurugi if they accept some minor conditions, which is for Togame to identify the first blade of Sentō Tsurugi without the help of Shichika. If Togame succeeds, Meisai Tsuruga will fight Shichika one-on-one, if he wins, she will hand it over, if he loses, they will give her Kanna and Namakura. Shichika thought it wasn't fair, but Togame explains that she wants to avoid killing this time round. When Togame was out inspecting the blades, Shichika helped the shrine maiden with chores but does not feel Shikizaki's poison aura. Later, Meisai invited Shichika for a drink as a thanks for helping up the shrine maidens, she explains that the temple is like a refugee camp, they are victims that mental health was destroyed from long-termed abuse by men, she wants to use the poison of Shikizaki's poison as medicine. After hearing that, Shichika still promised to fight to his utmost without doubt, they both shared how much people they had slew, he also told her he slain his father. Meisai then asks what on earth do he fight for, Shichika said, for Togame.

Later they realized they had been watched by one of the 12 heads by Maniwa corps, Kuizame Maniwa. Mesai Tsuruga then demonstrated Sentouryū on Maniwa Kuizame, killing him instantly. She then asks Shichika to take care of the corpse himself. Later he reunited with Togame, informing her that Maniwa corps attacked. Togame gave Mesai the blade that she assume that is the original since it has the oldest sheath, Mesai agreed with her thoughtlessly and commence duel the next day. During the duel, Shichika then realized the hunt for the original was just a excuse to bide time for Mesai to set-up Chikeikōka Sentō Meguri (地形効果・千刀巡り, Terrain Effect: Thousand Sword Circumference), he then escaped to a terrain that he knew she won't lay a trap, the place where Togame and him stayed. Despite that, Mesai still draw out a disposed sword from the ground, Shichika then identify that sword is the original, since it's the sword that chose the master. Shichika then defeats her with Kyotōryū, obtaining the original their third deviant blade. On the way back to Owari, Shichika then asks Togame if he loses, will she had handed over Mesai Kanna and Namakura, Togame replied that she never once thought he would lose. Shichikia smiled upon hearing that.

After defeating Hakuhei Sabi and retrieving the Deviant Blade he carried, Shichika also inherits the title of strongest swordsman in Japan.

He fights his sister and ends up killing her, fulfilling her wish to be killed.

After Togame's death, Shichika does not follow her final orders to live on and forget everything about her. He instead resolves to die at the hands of Emonzaemon Sōda. The grief he feels leads to Shichika fulfilling his role as the strongest Deviant Blade, and he singlehandedly storms the shogunate's castle. At the series' conclusion, Shichika is seen still alive, taking up Togame's wish to create a complete map of Japan. He is also seen traveling with Hitei Hime, who set her mind on following Shichika around.

Add a photo to this gallery

Kyotōryū: As a practitioner of the legendary Kyotōryū fencing school, he does not use a literal sword when fighting. Instead of a sword, he uses his hands and legs as weapons; the Yasuri family has historically been unable to handle real swords.

Kyotōryū: "Red Poppy" and "Daphne" hybrid striking technique - This technique allows Shichika to take all weight out of his enemy and his blows, making it possible to kill his opponent 272 times before it hit the ground, as seen in his fight with Uron.

Enhanced Strength: Due to his training since a very young age (likely since the day he could walk), even when not using Kyotoryu Shichika boasts of extreme strength surpassing that of ordinary humans, best illustrated in his fight against Zokuto Yoroi.

Extreme Speed: Shichika's base speed in battle also greatly exceeds common standards, since he can move so fast as to create afterimages, as shown in his fight against Zanto Namakura and Ento Jyuu.

Enhanced Durability: It is shown that Shichika was able to sustain multiple bullet wounds from Ento Jyuu and was still capable of defeating Emonzaemon Sōda, as well as destroying the last Deviant Blade.

Immense Reflexes: Shichika's reflexes are enhanced beyond the human limits. In shogunate's castle, he was capable of stopping Zantō Namakura's strike with his bare hands, simply blocking any of retainers' attacks easily, with an exception of Emonzaemon Sōda's Ento Jyuu.

Retrieved from "https://katanagatari.fandom.com/wiki/Shichika_Yasuri?oldid=6716"
Community content is available under CC-BY-SA unless otherwise noted.